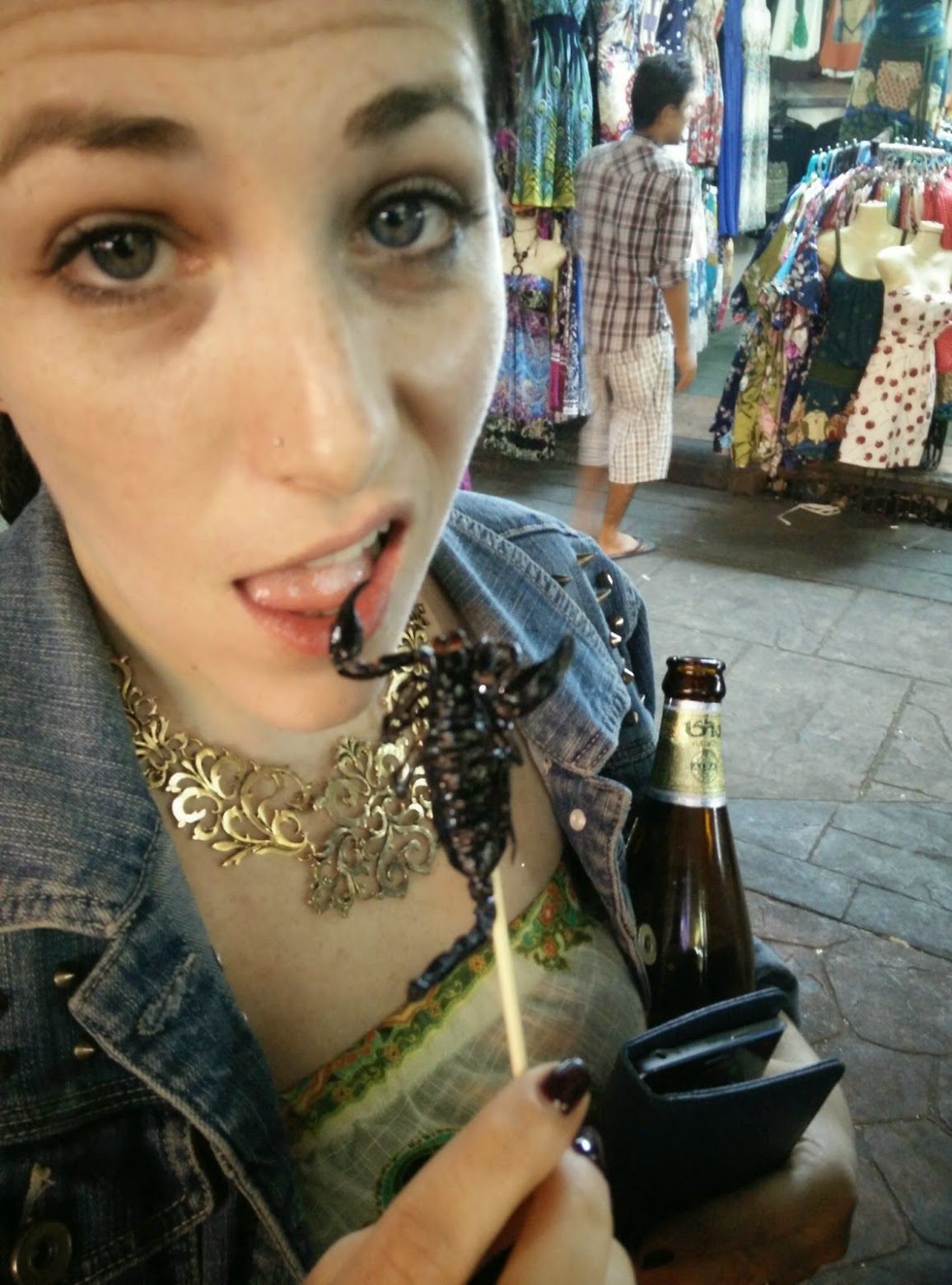 The first real backpacking trip I ever took was to Thailand and Cambodia with our resident backpacking friend, Andrew, and our awesome brother/sister-in-law combo, Jenn & Lolo. The five of us spent three weeks scooting around this region of Southeast Asia and absolutely loved it. It was Andrew and this trip that inspired Jay and I to take our big trip. 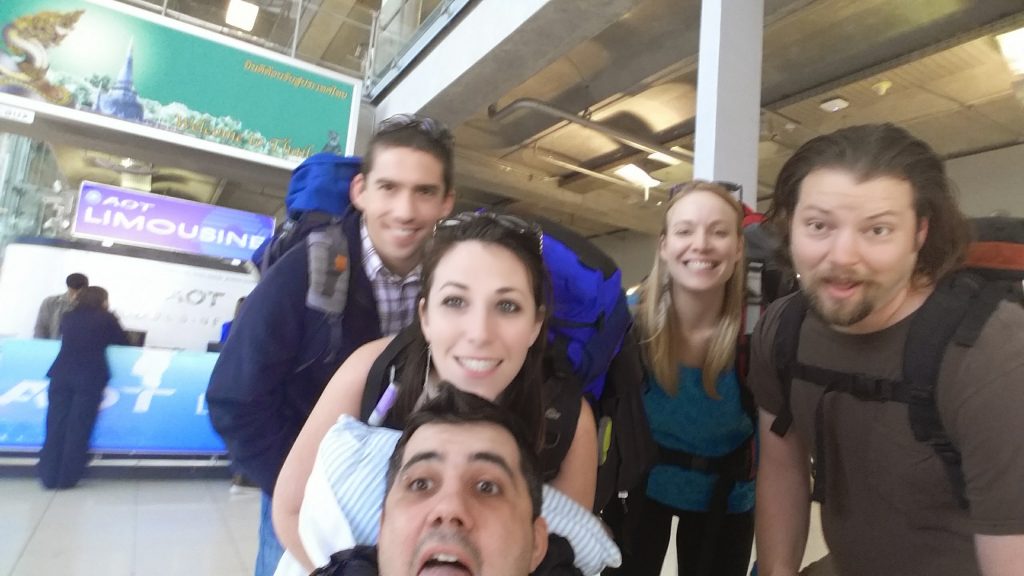 Somehow, this is the only picture of the five of us I can find. Sorry for the blur. From the upper left: Andrew, Jenn, Jay, Me, and Lolo.

Now, most people are worried about getting robbed or lost when they travel to foreign countries. Me? I was terrified of getting traveler’s diarrhea. I was hanging with some of my friends in hostels where we share bathrooms and I just didn’t want to be “that girl” shitting her brains out in, basically, public. 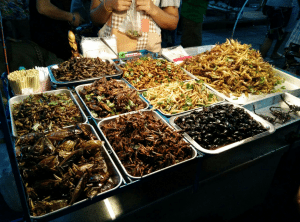 Beyoncé, can you handle this? This cart too bugalicious for yo, babe.

Our first stop was, of course, Bangkok. We stayed near the most popular tourist district in the country, Khao San, which is akin to a poor man’s Vegas in one or two streets. Seedy bars with neon lights, scantily clad women and ladyboys. Ping Pong shows and lots and lots of drunk white dudes being obnoxious. Well, one of the tourist traps are these mobile carts that locals roll around filled with different varieties of grilled and fried bugs. Yes, bugs. They have grubs and worms, crickets and grasshoppers, giant water bugs and…SCORPIONS.  So, of course, at this point I’ve had a few chardonnays and I decide that I need to be the badass. I order the scorpion. I think, okay I’ll eat the smallest part and leave the rest for the boys. I’ll look like a badass, but I’ll only eat the claw and stinger so, I’ll only be eating a small portion. Perfect plan. All goes well, I eat my tiny portion while the boys have to eat the body. But I still look like a badass. I get pats on the back and I’m pretty sure Lolo bought me a beer for my efforts. 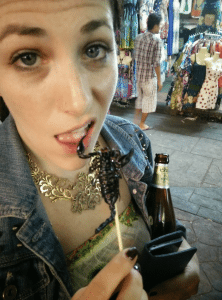 T-Minus 24-hours later, I was in a cab on the way to the airport which is a good half hour outside of the city. We were not even 48-hours into our trip and my worst nightmare was already coming true. I had to go and I had to go RIGHT NOW! The only problem was that neither Jay nor I spoke Thai and our driver spoke no English. That and we were in bumper to bumper traffic on the highway.  I’m frantically asking the cab driver to pull-over or pull-off at the next exit. But we were in four lanes of traffic and were going nowhere pretty fast. The tension in the car was real, as we’d just had a miscommunication about who was paying the toll. Just as we got it figured out, I start yelling at the driver to pull-over in a language he can’t understand. All he can see is that I am upset and pointing frantically outside of the car, babbling in some weird tongue about something that doesn’t make sense. He was understandably confused and annoyed.

Shit was literally getting real. Luckily, I am used to being in stressful situations. Some sort of godly calm came over me and I did the only thing a grown woman would do in a situation like this.  I leaned forward until I was almost in the driver’s lap, squatted down, and started making farting noises – the universal language for “I have to shit RIGHT NOW”. This, as you can imagine, didn’t go over too well.

Disaster Pants occurred right as we were getting to that first dark red area on the route. The Shell station was a few exits down.

The driver starts yelling at me like I’m a meth-addled lunatic.  I tell Jay to pull up a picture of a toilet on google photos. Of course, this doesn’t want to load and so… I continue to make fart noises, but I gotta take it a step further. I get into the front seat and start to rub and pat the driver on the tummy making louder and louder fart noises. 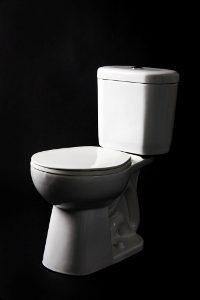 If you are a traveler, screenshot this picture right now and save it in your favorites. Right. Now.

Finally we’ve inched our way over to an exit ramp. The traffic isn’t moving and the guy doesn’t know what we want. I start to get out of the car right there on the ramp when all of a sudden I see what I can only describe as heaven, a neon Shell  gas station sign glittering like an oasis in the distance. We start frantically pointing at the sign. He still doesn’t get it. At this point, we are all yelling at each other. I don’t know how but he finally gets the idea that we gotta stop at the Shell station. I’m sure he was cursing as he spat out Thai and pulled up into the parking lot.

I got out of the car before it even stopped and booked it to the bathroom. When I finally came out an eternity later, drained of all stomach contents (and the will to ever show my face again), the driver is sitting on the hood of his car with my husband. They are both crying.  Not sadly, but laughing so hysterically that both of them could barely move or breathe and tears were streaming down their faces. Before I could say anything, I had to book it back to the bathroom. This only made them laugh harder, which I didn’t even know was possible. I could hear them cracking up from my bathroom stall, that’s how loudly they were laughing.

The driver ended up laughing the entire rest of the way to the airport. He hugged me multiple times before I left, just laughing and carrying on. I wonder if he ever knew how close I am to crapping in the back of his cab, because, my friends, in this case the struggle was very real. I never took another trip without a picture of a toilet readily available.

I learned later that it was the scorpion that did the low-down dirty trick on my GI tract. Apparently they don’t always drain all of the of the poison out, which is mostly concentrated in the claws and tail. This poison is particularly hard on women for some reason. My plan to look like a badass totally backfired – take that as literally as you want.